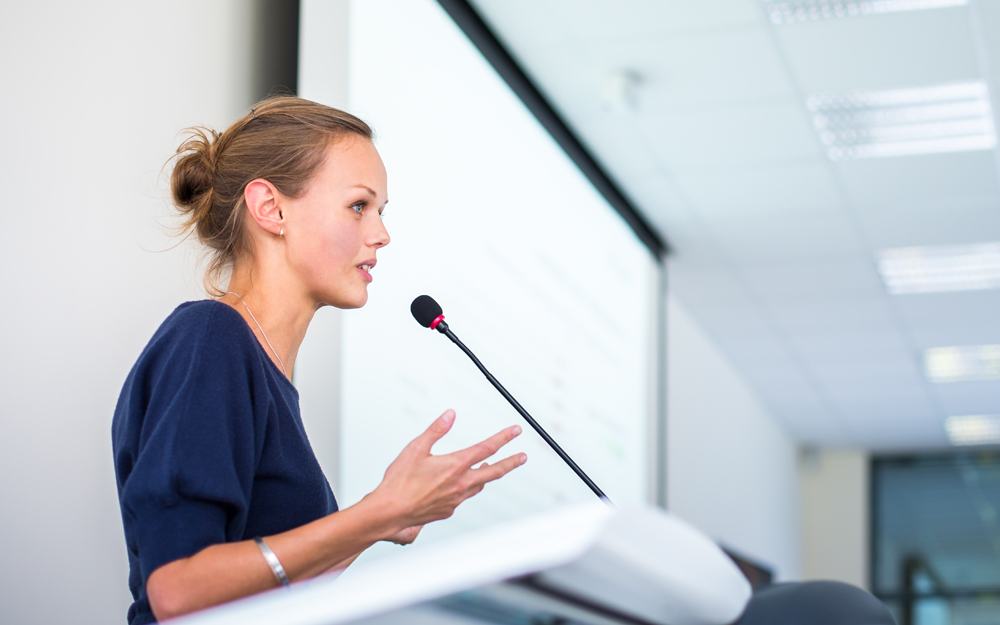 It might seem ironic, but Hillary goes low and Donald goes high – with their speaking voices when talking to large audiences. That’s the finding of Dr. Rosario Signorello who studies how politicians change their pitch and volume to attract voters.

A low-pitch is associated with calm

Signorello observes Clinton’s voice often gets deeper as she nears the end of her speeches. This is likely so she can end on a calm note, says Signorella, a researcher in the Department of Head and Neck Surgery at UCLA’s David Geffen School of Medicine.

Trump does just the opposite. He goes up in pitch and volume as a way to lead and hook his audiences, explains Signorello.  “He says ‘terr-IFFIC’ or ‘you’re a los-ER!’” Signorello told Atlantic magazine. “The audience will never get bored and they will always cheer.”

But interestingly, both Clinton and Trump speak in a low-pitched voice when they want to impress — essentially when they’re talking to what may be their equivalent of a boardroom or hiring panel.  And they don’t vary their pitch much, adds Signorello.

That’s typical vocal behaviour for leaders and CEOs worldwide, as well as different types of animals. Universally, a low pitch comes off as authoritative and confident.

When Dr. Strange opens in November, you can be sure you won’t hear Benedict Cumberbatch as the superhero speaking in a Minnie Mouse voice.

The research of Signorello and others confirms that we instinctively attach greater weight, and listen more attentively, to deep resonant voices than to high-pitched, squawky, or shrill voices.

Does the power of a low pitch put women at a disadvantage?

No. Researchers say female voices are easily as charismatic as male ones. But the rule of thumb applies to everyone. Your voice needs to convey warmth and not go too high.

At TalentWorld, we want all candidates to be themselves in interviews.

However, just as you dress for an interview, it’s worth it to consider your voice performance in an interview or any workplace encounter.

Many of us, when under pressure, let our nervousness take over our vocal cords.

Our favourite tips for keeping control of your voice

To prepare for an interview or meeting, listen to professional speakers. Just bring some awareness to the qualities of voices that you find impressive. Ask yourself, what makes their voice sound knowledgeable and reassuring? If you’re watching a dramatic movie or TV, listen to how voices line up with the roles.

News anchors are good role models. They convey information with sincerity, warmth and modulate their voice to keep you interested. Their pacing is also excellent.

Take pauses and avoid speedtalking. A pause is a beat, a breath. Try not to speed-talk. It’s common to race when we’re nervous. It’s as if we feel we need to get everything out really fast because we’re sure to be shown the door any minute.

Communication experts say overly fast talkers convey a lack of confidence. It indicates they may worry about boring their audience, or fear they’re not worth their time.

It also makes listenersworkreallyhardtofollowus which annoys them.  We write with spaces, we need to speak with spaces. But don’t slow to a tortoise pace.

If unsure, just record yourself and listen to your own response to your pacing. Once you’re aware of speaking either much too fast or way too slow, you’ll automatically self-correct.

Think about lowering the pitch of your voice if it’s overly high. People train their voices all the time, it’s do-able. Consider taking voice coaching or an acting class – that’s a fun way to become more in control of how you sound.

It’s not a whim to work on your voice, it’s a valuable skill to be a strong communicator and that includes projecting well.

Avoid up-talk. Up-talk is the term for when all your sentences sound like questions rather than statements.

My name is Sandra? I’m excited to meet you? I’m an expert in social media? Are you really Sandra, because it doesn’t sound like you’re sure!

There’s great concern among educators and other groups that young women are especially prone to this inflection when talking. However, experts say young men are increasingly adopting the practice as well, to their detriment.

The problem is that up-talking conveys the opposite of confidence and assertiveness. Instead, it makes a person sound immature, uncertain, timid, and lacking authority.

A recent spate of studies on up-talking all found it dramatically hinders career advancement.

At TalentWorld, we’ve successfully placed thousands of people in full-time, contract and temporary positions in every sector. We can assure you that the best way to keep your voice warm and calm is to walk into the interview with a genuine interest in having a conversation, rather than a desperate feeling that you need to impress.

In other words, just don’t try too hard. All you need to do is notice if you’re speaking in a way you don’t wish to.  With awareness, you’ll automatically re-calibrate your voice, naturally.